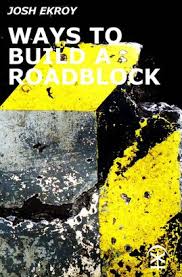 I remember during the time of first Gulf War a short radio piece in which the correspondent reported a conversation with someone from a country more use to wars than our own, or our own was at that time. The phrase that stuck with me was how will you live now your country is at war and the correspondent’s inability to respond. While he took the possibility of war seriously it had not occurred to him that it would change the way he lived. And in many was it has not, but our political discourse has changed, become weaponised or militarised. In his book Ways To Build a Roadblock from Nine Arches Press Josh Ekroy navigates the language of war, and the language used by those who find themselves, one way or another, at war, in short, the language required to build a roadblock.

I have known Josh Ekroy’s poetry for over ten years, at its heart is a trust in metaphor and the reader, an interest in juxtaposition and rhetoric, and a strong sense of justice. He is a very dry poet who gives the reader time to catch on to what he is up to, and expects them to place a poem in a larger context. Along the way there is some gleeful vengeance, cool images, an interest in found phrases, percussive language, empathy and an eye for the absurd.

The book is divided into three numbered sections. The first, from which the title poem is taken, deals directly with the politics and experience of our recent and continuing  wars. The second is more personal dealing with family and JE’s literary interests while keeping contact with the political including my personal favourite Kafka’s Recipe for Boiled Cabbage.  The third section returns to the political, reminding us that we have been here before, and putting our shared experience and the poet’s own response into context.

The opening poems of the first section sets the register for the collection.  In the poem Ways To Build a Roadblock JE engages with the formal language of instruction, but introduces a surprising detail in the middle of the poem. If what the poem’s certain voice says is true or not we cannot tell. It pulls a reader up short and makes them think, and brings the idea of having to build a roadblock home. It also includes the evocative phrase Passing the code word back and forth like a grenade.  The first poem of this first section From the golfcart shows JE’s interest in juxtaposition.  A description of the gruesome mating habits of the Empid fly and a gleeful account of the meeting of George Bush and Tony Blaire in 2003.  The two scenes set side by side without comment for the reader to make their own comparison.  The section ends with Pause a description of a soldier finding silence in the midst of the noise battle, the poem creating a real sense of silence and pause as it does so.

The second section moves into the more expected territory of contemporary poetry with Woodpecker recreating the strangeness of a boy being introduced to alcohol, though JE finds his own way into this subject matter with Goldfinches where the birds form a mysterious centre of family ritual and business; and in Gothic Aunt Revival a funny and nostalgic take on family.  It also includes the wonderful Kafka’s Recipe for Boiled Cabbage which has a truly absurd logic which is absurd and nevertheless still logical.  I find it a joy to read.  I can see what is coming and it is a further joy to read it as it comes. Lord Hutton Reports comes close, with the Peer giving his definitive account of the plight of Humpty Dumpty.

In the third section JE’s poetic interests really come to the surface.  The subject matter is mainly political bringing material from ancient Greece, the Raj, and Cavafy.  In Tourist Bus Halt an exotic tourist scene becomes a stage set, in the context of the book this poem seems to me to cast doubt on the possibility of ever understanding another culture, and on our motives for doing so.  The poem Medical Advances describes some new medical knowledge that has been gained as a result of using torture, and brings to mind the spurious science of the concentration camps without ever saying so. This section includes Some Useful Phrases another of my favourites, the poem is a short collage made up from phrases taken from a Short Walk In the Hindu Kush, each phrase suggesting the following phrase, resulting in a map of the consciousness of a westerner in Afghanistan.  The section ends with Leader in which JE occupies his enemy’s language, writing an invective against peace, peace being a room in which it is safe to eat muffins.

In many of his poems JE builds tottering monuments.  His intention is defiantly satirical, delivered in regular stanzas or controlled verse paragraphs.  There is a strong interest in the thump, lope and rumble of language; luminous images as in SAMS a dusty river bed grins back;  juxtaposition not only with metaphor and images but of language where uncomfortable words like excremental, toxin,  and penis are used.

I think this collection is a unique and surprising cocktail, where even the acknowledgements gave me a surprise.  There is only one true epigraph in collection, but from the acknowledgements we learn that many of the poems include found elements.  The only surprise perhaps being that we think anything has changed at all.